A downloadable tool for Windows and Linux

This tool automates the compilation of JavaScript files with NW.js' compiler. The compiler creates binary versions of the files, ensuring protection of the source code. The tool also packages the code (and the assets) on an archive that Nw.js can read.

First of, you'll need to do a few modifications to the project. I've included the replacement code you need to apply to your project (after deploying it, of course). After that, it's pretty simple: Tell the tool where the nwjc.exe file is (RPG Maker MV has the SDK as well, which includes nwjc, but you can download a different version from https://nwjs.io) and the project you want to compile. In a few minutes, you can upload the game to the public.

(Yes, you need the quotes there.)

--SDKLocation: Sets the location of the SDK.

--ProjectLocation: Sets the location of the project.

--Parallel: Turns on Parallel mode. You can use it without the previous two arguments as well.

--TestMode: Test the game after compiling. Cannot work when the CompressProject argument is in place.

Any computer that can run RPG Maker MV (and/or MZ) games, practically speaking.

Can I use it on Linux with WINE (or Proton or <insert a compatibility layer here>)?

Depends. If it is to make the Windows version of your game, then yes (assuming that it can run .NET Framework apps). If you want to use the tool to make the Linux version, then no. You can use the Console App version on Linux, though.

Can I use it on my current project?

The tool is a wrapper for the nwjc. I have used the tool for my project and I haven't noticed any issues. So, it has a "go-live" license (as in, it's OK to use it on your projects).

Hi, can we have option to convert .json file too?

just incase issues aren't seen (I'm new to github so i'm not sure how most of it works) I encountered an issue with this tool, and have reported it on it's github page
https://github.com/acemod13/RMMVCookTool/issues/46 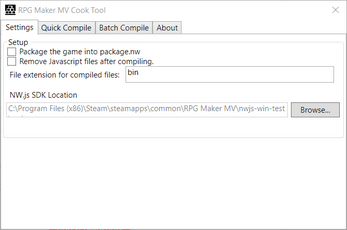 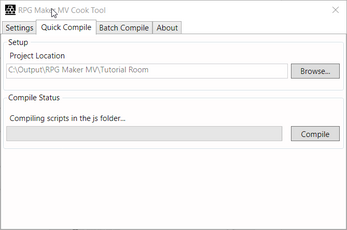 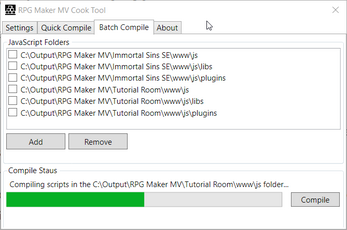 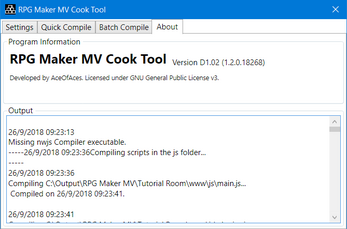